When I first put this outfit together, I was going to write a post about how lush this yellow jumper is:

I was going to write about how much I love these Monki earrings:

And, most importantly, I was going to write about how I finally found a pair of culottes that don’t make me want to throw up. (I mean, I seriously didn’t think it was possible.)

But instead, I’ve decided to dedicate this post to the woman who saw me in this outfit last week and made no effort to hide the look of disgust on her face as she looked me up and down, eyes lingering on my tummy.

Throughout my entire life, I have never experienced what it is like to not be the fat girl. In elementary school, a boy named Daniel convinced half my class to call me “Truck” behind my back. I only found out when the girl I called my best friend accidentally let it slip.

When I was thirteen, a girl in my class planned a sleepover, and her mother invited me to join them. When I got there, the girl was clearly surprised to see me, and I can still remember standing awkwardly in the living room trying not to make eye contact with the other guests while she argued in the next room to her mom, “…but she’s fat.”

Five years ago, I was walking home from work when a car load of grown men drove past and yelled at me to stop eating Big Macs.

Two years ago, at a local park as I was finishing the final run of the couch to 5K program I had been steadily working for two months to complete, a middle-aged man on a bicycle rolled up in front of me, forcing me to come to a halt. “You’d be able to run so much faster,” he said, “if you didn’t go home and eat chips and pies and cakes after every run. Stop eating so much and maybe the running will pay off.”

Incidents like these used to shrivel me. I spent my life trying to shrink my body and my presence. If I avoided drawing attention to myself, if I made myself a wallflower, if I lived on the margins, if I pleased everyone and caused no fuss and everyone liked me – maybe no one would notice that my body looks different from theirs. But eventually (a very long eventually…a twenty-five year eventually) I realised that this is the body I have. It can get smaller (and it has), it can get bigger (and it has), but no matter its size at any given moment, it’s mine and I have a right to love it as much as I want. And if the way I choose to love it is by dressing it in an outfit that looks half Victorian school boy / half circus clown, then I have every right to do that whether it flatters my cute, little tummy or not.

Several years ago, if someone had made the same disgusted face as the woman who side-eyed me last week, I would have gone home, taken off that outfit and never worn it again. But now, I have made it a point to wear this same outfit three or four times since. It probably needs washing by now, but I don’t even care because it makes me feel like such a badass when I wear it. (Don’t worry. I promise I’ll wash it – self-love is a constant struggle, but it’s so much easier when you don’t stink.)

(Unless you want to stink. I won’t judge. Seriously – just do what makes you happy.) 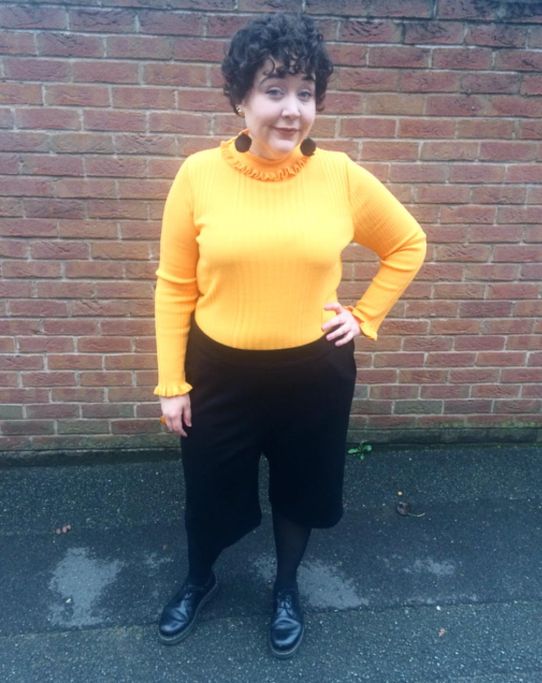 Culottes: Forever21 Plus (I bought them instore in the UK, but despite scouring the Internet cannot seem to find a link! Soz!)