There are blogs and YouTube videos galore from American expats discussing their experiences of adjusting to life in the UK. An easy Google search will lead you to them, and you can learn everything you could possibly want to know about differences in accents, sales tax, food portion sizes, tipping at restaurants, healthcare, how people pronounce aluminum, or what a chip actually is.

But cultural assimilation can be very personal – I have been in the UK for over 9 years  now, and sometimes I feel like I’m still in the process of acclimating (or acclimatising, which is the preferred British word for it, just to drive home the point of this post) to the culture here. Let me tell you about some of things I never thought I would experience.

I never thought I would have to explain that Hootie and Blowfish is a real band.

And I definitely never thought that I would live amongst, be friends with, or (gasp!!) date anyone who finished watching an episode of Friends (“The One with the Five Steaks and an Eggplant,” to be exact) and then went about their business under the impression that Ross, Chandler and Monica saw a fictional band called Hootie and the Blowfish. Fictional?! Sorry, but the feelings Cracked Rear View gave 10-year-old-me were very real, thanks. But, I mean, I guess I kind of get it. “Only Wanna Be with You” only reached 87 on the UK charts. And Hootie and the Blowfish doesn’t really sound like a name any real band would actually choose for itself, so it makes sense that so many British people I’ve met aren’t familiar with Hootie. (But I’m still gonna love them the best that, the best that I can.)

I never thought I would have to convince or prove to someone that I’m actually American.

Speaking of Friends, I worked at a Friends-themed coffeehouse called — what else? –Central Perk for about a year while I was in university. I was the only American on the staff, and you would not believe the number of people who asked if my accent was real or if the management made me fake it for authenticity’s sake. Once, after delivering some lattes to a table, I heard one customer say to another as I was walking away, “I would never put on a fake accent just for a job.” In fact, even when the coffee shop closed a few years later, apparently there were still people who didn’t believe I was an American. This was a comment left on a Facebook post about it: 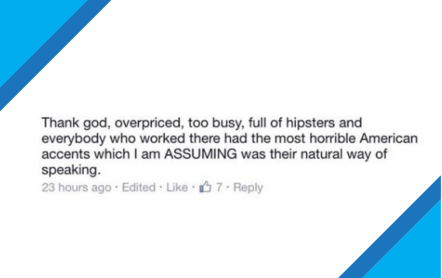 I never realized how many baseball references I use in my daily life.

Especially for someone who has no interest in baseball. Straight off the bat. Just touching base. Out of left field. Ballpark figure. Rain check. Cover all my bases. I say all of these things regularly and without thinking. Some of these idioms have made their way to the British side of the ocean, but others apparently have not and result in a blank stare from people I’m talking to, and I can’t keep up with which ones are which, so I’ve just stopped trying.

That’s it. That’s the whole story.

I never thought I’d be forced into a corner of a room, surrounded by a large group of shouting 16-year-olds I didn’t know, and not allowed to leave until I said the word “awesome” enough times.

And that’s not the whole story.

I never imagined JUST how weird the weirdest conversation of my life would be.

I use taxis a lot in Liverpool because I don’t drive here, and the drivers always have a lot to say when they realize I’m from the U.S. Normally it’s a joke about whether or not I like KFC (it’s HiLaRiOuS because I’m from Kentucky, you see) or an overly-serious-discussion-for-someone-I-don’t-know-but-am-stuck-in-a-car-with about whether or not I own a gun. (I do not.) But one time a taxi driver asked me if I like meatloaf. (The food, not the singer.) Like most normal people, I don’t have strong feelings about meatloaf the food. (The singer, on the other hand? That’s a different story.) But the taxi driver had lots of feelings. He spent the entire drive ranking his top meatloaf-eating experiences during his travels to the United States, state by state, discussing in detail the moisture levels, crumbliness, and freshness of ingredients of each individual meatloaf experience. The taxi ride lasted about 20 minutes, and he was apparently only halfway through his entire list by the time we got to the destination. I kind of hope I meet him again someday because it all feels very unfinished. (Also I was very hungry when I got out of the cab.)

I never thought I’d spend much time in Subway, much less slink out of there in shame.

One food I do have strong feelings about is pickles. (Or gherkins for my British friends.) But not just any pickles. Dill pickles: hamburger slices, Klaussen, Vlassic. I have lived in the UK for a little under a decade and I have only ever found ONE jar of dill pickles (and you better believe I look every single time that I go into any supermarket.) The only place I can find pickles that taste like the ones I miss from home is Subway, the fast-food sandwich place, but I’ve gotten really tired of ordering a whole salad just to pretend that I actually want any of it other than the pickles. Which is why my embarrassing, shameless ass ended up there just the other night ordering a whole salad bowl of pickles to go.  Apparently this is not a normal thing, and I would not recommend doing it unless you like being stared at like you’re an alien and then being treated like you’re a criminal. (For any other pickle-loving American expats reading this, a Subway salad bowl holds a approximately three day’s worth of pickles, and it’s 100% worth the shamelessness involved in ordering it.)

4 thoughts on “Never Did I Ever”